Most all tourists that visit Japan say the same thing: "Wow!  Everyone here is so polite!"  Well, that's true if you're a tourist--especially one with a phatty wallet.

Having lived here for over 5 years, I have come to realize that although Japanese people are generally very polite (why else would I choose to live here), there are times when extreme rudeness prevails.  Here are some examples along with some attempts to understand them:

No one will ever hold the door open for you.
It'll just slam in your face.  Not only that, but no one will even look behind them for half a second to see if someone is behind them.  The reasoning behind this policy eluded me for a very long time.  It was not until I moved to Tokyo that I realized the logic behind it.  Tokyo is a city of 12 million people crammed into a space the size of Burbank, California.  You can't be holding doors open for people in a city like that.  You'll be the door man for the entire day.  You'll also most likely get trampled and urinated on.  Albeit polite, it's not practical.

You gotta bag your own groceries.
Many grocery stores in Japan simply don't have a person there to bag your groceries.  The mysterious lack of this service in such a service-oriented country confused me.  However, many people here do not have cars (myself included).  As such, we don't buy the 5-ton Costco box of Special K along with 500 other items promptly loaded into the back of a 10-seater SUV.  Maybe "bag boy" service isn't necessary because 2-4 bags is all people can hand carry / bike home.

No free refills.
It's very rare to find a restaurant that offers this.  This just sucks.  I really miss those trashcan-sized USA drinks sometimes.

No one will ever check on you in a restaurant.  "How is everything?"
Personally, I don't mind this so much, but I've had friends point it out to me.  The ideal in Japan is to leave the person alone while they're eating.  If they need something, they'll flag down a server.  I can't tell you how many times in America I got visited by the server right after taking a massive bite of a juicy double cheese bacon egg sauce burger.  Fortunately, Japan has solved the "I can't flag down a server" problem with technology.  Some restaurants have a button on or near the table.  Push it and someone comes.  It's kind of like those flight attendant buttons you used to push as a kid (and maybe still do).

Everybody smokes.
Old men smoke while taking a dump.  Dogs smoke a cig along with their owners while going for a walk.  And the worst of all--people light up while walking in front of you.  This one sucks too, and the only explanation I can offer is that cigarettes are marketed extremely well here.  Cigarette companies sponsor sporting events.  Pro athletes even have cigarette company logos on their uniforms.  I don't know about you, but I don't associate sports with smoking.  Of course, other strange associations have occurred--like beer and football...and beer and hot girls.  Cigarette vending machines are everywhere.  Just insert about $3, and you're on your way.  Luckily, some steps have been taken to curb such behaviors.  Vending machines now require a special ID card to purchase cigarettes.  This is to prevent sneaky high school boys from getting their filthy hands on that golden tobakki.

Ladies first?  Ladies last!
Although today it's associated with courtly chivalry, historically "ladies first" was used to check if a place contained raiders or other dangers.  Send the lady in first.  If she gets killed, don't go in there!  Nevertheless, what's common courtesy in the Western world is not so in the East.  The cool thing here is that actually letting the lady go first gets a lot of notice.  Do it, and the Japanese ladies will swoon.  You win major brownie points for something considered commonplace in your culture.  Unfortunately, however, it's not always practical because you'll be waiting for half the city to go first.  See point #1.

Wearing deodorant is not a common practice and/or Japanese deodorant sucks.
Especially with dudes.  When I was teaching English, I had a class full of high school boys.  One day they hauled in stinking like my socks after a hard day battling an extreme athlete's foot fungus infection.  They joyfully said to me, "Today was the sports festival."  Yeah, guys...I can smell the sports festival.  I don't really get this one.  I've heard that Asians in general don't sweat as much as Westerners.  That may be true, but there are cases when the funk is in town taking a breezy tour of Tokyo.

People are so damn noisy sometimes.
They're called "bou-sou-zoku" (暴走族) -- Japanese motorcycle gangs.  They're usually most active during summer and ride their bikes with mufflers purposely removed.  Sadly, the cops don't seem to do much about them.  I think they're afraid of them despite half of them riding prissy-boy scooters.  I think these young men are in search of an expressive outlet.  They've discovered that riding around on a noisemaker serves perfectly as that outlet.  Having to be polite and quiet all day everyday apparently wears on people.  Well, you blasted ragamuffins...I'm trying to sleep!  Why not go sing karaoke or something?  The scenes from Charles Bronson's "Death Wish 3"--where the angry townspeople use chains to knock the gangs off their bikes, then proceed to shoot them--resonate in my vivid imagination.  "Death Wish 3" is one of the greatest films ever made, by the way.

And now for a few pictures... Does the smoke know it's supposed to stay on that side of the room? Some people just can't handle life in Tokyo.  The umbrella posed to trip people is a nice touch. 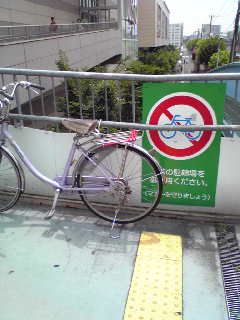 Living abroad I often find myself comparing the best and worst of my home country with that in Japan.  How cool it would be to mix-and-match to create the perfe...

How to Find a Good Apartment i...

Finding a good apartment or any apartment in Japan can be a real pain for foreigners.  Most apartments require a guarantor on the lease, basically someone to vo...

How I Send Money Between my Ja...

Despite living abroad in Japan for quite some time now, I of course still maintain a USA presence of sorts in the form of bank accounts and credit cards.  There...

During my recent trip back to the States, I engaged in an engaging conversation with a learned compatriot, the staunchly patriotic father of one of my best fr...