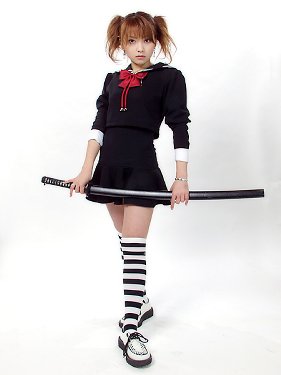 They Exude Femininity
Japanese women do anything and everything to assert traditional femininity--and feminine is hot.  Most don't leave the house without donning the latest designer styles, high heels, pantyhose, perfectly-done makeup, and expertly-styled hair.  My morning commute teems with office ladies strutting the runway as if looking to be America's next top model.  90% are in skirts.  Those few in pants still look awesome because their suits are professionally tailored to accentuate their womanhood.  Everything about the way they present themselves screams FEMALE.  I wouldn't be surprised if their sweat glands excrete male-attracting pheromones.

Go to the mall on a weekend in America, and most women will be casually clad in jeans and tshirts.  Go to the mall (or even the post office) on a weekend in Japan, and it will look like a Ford modeling convention.  Watch the opening scene in the movie "The Devil Wears Prada."  That is each and every Japanese woman's morning routine.

Now that I think more deeply about it, Japanese femininity is so pervasive that even the men wallow in it.  Transvestites known as "new-half" are surprisingly popular on mainstream Japanese television shows.  A majority of Japanese comedy shows feature cross-dressing male comedians.  And even I have worn far more dresses during my 5 years in Japan than in my 26 years in the USA.

They're "Kawaii"
Commensurate with Japanese femininity, the ultimate goal for a women in Japan is to be "kawaii" (cute).  Culture is a major factor; however, genetics are in play as well.  Japanese women have naturally soft features: rounded cheekbones, small plane noses, and untanned skin.  Go to the beach in Japan and you'll see most girls doing everything in their power to avoid even a mild suntan.  Hats and SPF 500 sunscreen abound as they absolutely refuse to turn brown.

They want to look young and cute like Hello Kitty and many pull it off superbly.  There are those that aspire to be sexy as opposed to cute; however, I would say that's a diminutive minority in Japan.  Think Jennifer Love Hewitt and you have a pretty clear image of Japanese female sex appeal.

They're Fit
Whether it be the healthy fish and rice-based diet or dysfunctional social pressure to stay slim, Japanese women do appear slimmer than most Western women.  Slim is tragically more attractive than chubby in this post-Twiggy world we live in; however, staying slim certainly aids in maintaining a youthful appearance for longer.  Compared with the USA, I rarely see overweight people in Japan, and a society that places such value on a slender, healthy appearance produces some pretty hot women.

Mini + Skirt = Hot
I don't know the exact reason, but Japanese women love showing off their legs.  Maybe it's because they can.  Even in the dead of winter, I see young women donning the mini-est of mini skirts.  They want attention, and they certainly got mine.  The shocking sites I see just on the way home from work are things I would usually have to pay for in the USA.  I often tell my close colleague: "Whoops.  There's another one that forgot to wear pants."  I feel like I'm at the beach hanging out with Chuck Henry from "Eye On LA."  I should make some "Eye On Tokyo" videos vividly revealing what I'm talking about.  Unfortunately, I'll probably get arrested and labeled a peeping Tom pervert like many Japanese politicians.

Oddly enough, they don't show off many things other than legs.  Seldom do I see Japanese girls wearing belly shirts or cleavage-amplifying attire.  I once asked a girl why this was so.  She said because Japanese are shy.  Yeah, that makes sense.  They'll show off their legs to the point you can almost see their ass-crack, but a belly-button is off-limits.  I'll just dismiss it as culture.

They're Rich
Despite the popping of the boom bubble in the early 90s, Japan maintains an extremely high standard of living laden with ridiculous excess.  Japanese people dress-up their dogs in outfits far nicer than my own.  Ok, that doesn't say much for my wardrobe.  Women's spas offer a full menu of decadence: stress-relieving massages, organic herb mineral vitamin facials, jewel-encrusted manicures, skin-whitening laser treatments, anti-wrinkle radiation therapies, and plasma infusion skin baths.  Call it overindulgent shallow consumerism, but it makes these spoiled daddy's girls freakin' hot.  Rich girls are hot because they can afford the maintenance fees, and Japan has the plethora of hedonistic shops to eagerly provide that maintenance.

I Love a Woman in Uniform
Women love a man in uniform--firemen, policemen, military officers, or any other member of the Village People that tickles their fancy.  Men love women in uniform too--flight attendants, nurses, school girls, dental hygienists, or whatever fetish tickles their fancy.  Japanese uniforms are awesome because they're twisted, often sexy transformations based on America's 1950s~1970s uniforms.  Take a Catholic schoolgirl uniform from the 1960s, remove 80% of the skirt length, and you have a modern Ralph Lauren Japanese schoolgirl uniform.  Take a 1950s nurse uniform complete with old-school Red Cross head wear, color everything pale pink, add super-model makeup, and you have a Japanese nurse.

Thus I will conclude this exploration into the hotness of Japanese girls.  I hope you have enjoyed this debauched scientific adventure.

How to Watch Netflix in Japan

NOTE: Yes, I know that Netflix is now available in Japan.  However, the services I explain below have proven extremely valuable to me for viewing streaming serv...

I noticed a pattern on B-Mobile's website--a pattern that seemed to show that all Docomo Xi phones can get LTE.  Since Docomo just started selling the iPhone 5s...

A week before moving to Japan I was called to jury duty.  My happiest day was calling them and telling them that I can't make it...ever.  They added...

While enjoying my dinner in a nearby Tokyo food court, I spied an older gentlemen smoking what appeared to be a conspicuous metallic cigar.  Upon further intros...