Life in Japan - Why Americans Are So Fat

Before moving to Japan from the US, I had been a vegetarian for 8 years (age 18-26).  I originally became one because I thought it healthier to cut meat out altogether as a source of calories.  Hopefully, not eating meat would reduce my caloric intake and unconsciously lead to healthier meal choices.  Seeing how many of my fellow Americans were or eventually became grossly overweight, I should make a lifestyle change now to avoid future health issues.  Unlike many vegetarians/vegans, I chose the vegetarian lifestyle solely for health reasons and not animal rights reasons.

I gave it up shortly after moving to Japan:
But the primary reason I quit being a vegetarian is that living in Japan opened my eyes to the real problem.  "Vegetarian" is barely in the Japanese vocabulary.  "Vegan?  What's that??"  I looked around and saw a significantly slimmer population with a longer lifespan--a population that had no problem devouring meat.  Why are they so slim and we so fat?  The blame shouldn't be placed on the meat.  Here are more tuned explanations of America's weight issues:


Read more: Life in Japan - Why Americans Are So Fat

Most all tourists that visit Japan say the same thing: "Wow!  Everyone here is so polite!"  Well, that's true if you're a tourist--especially one with a phatty wallet.

Having lived here for over 5 years, I have come to realize that although Japanese people are generally very polite (why else would I choose to live here), there are times when extreme rudeness prevails.  Here are some examples along with some attempts to understand them: 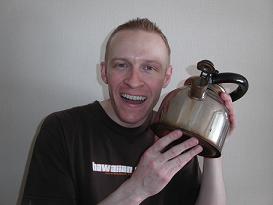 I said a fond farewell to my old kettle today. In other words, I threw it in the trash. It was purchased 2.5 years ago at Donki Houte (ドンキホーテ) in Nakano-ku. I used it solely to make tea, so the inside was horrendously caked with 2.5 years of tea. In fact, I could make a pot of tea just by boiling water in it.

Unfortunately, I outgrew my old kettle. It holds 1.7 liters of fluid, and I pushed it to the limit each and every time I used it. Tea would explode out of every kettle orifice upon reaching the boiling point. It got kind of annoying.

So I trashed it.

I went to Super Viva Home in Toyosu and bought a 3.7 liter kettle. It's huge and makes a ton of tea. The design looks exactly like my old kettle, so that made me happy. I like my new kettle, but there will always be a place in my heart for my old kettle.

By the way, is a kettle considered "burnable" or "non-burnable?" I put it in with the "non-burnable" thinking it would suffer a slightly less-degrading demise.